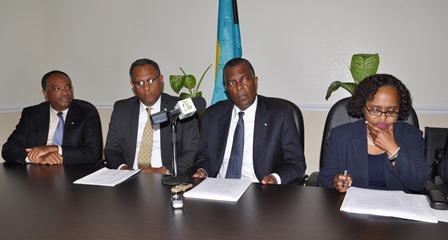 FREEPORT, Grand Bahama – One hundred and fifty delegates from 23 countries will converge on Grand Bahama for the 9th UK-Caribbean Ministerial Forum, April 28-30, 2016 at the Grand Lucayan resort, Minister of Foreign Affairs and Immigration, the Hon. Fred Mitchell announced during a press conference on Wednesday.

Prime Minister of The Bahamas, the Rt. Hon. Perry Christie, will officially open the event on Friday evening. The first session of the UK-Caribbean Ministerial Forum, held every two years, was in Nassau in 1998. The last one was held two years ago in London.

According to Minister Mitchell, the Foreign Secretary of the United Kingdom, the Rt. Hon. Philip Hammond, is expected to head their delegation. Delegations from the Caribbean will be headed by the High Commissioners or Ministers of Foreign Affairs. His Excellency, Ed Bethel, High Commissioner of The Bahamas to London, is already in Grand Bahama.

Explaining the purpose of the Forum, the Minister said members of the region will exchange views with the British about their interests in the world, and their concerns in the Caribbean sub-region.

“We expect an exhaustive set of discussions over those two days on things which range from energy, security, education, the question of expanded opportunities on employment, development, to exchange views on Foreign Policies.”

Minister Mitchell added that there are two things in particular that he thinks will be discussed, and they are: “1) The fact that Financial Services is now front and centre with concerns with the Panama Papers and what is happening in the United Kingdom; and 2) De-risking, which has become an important issue for Caribbean countries where local banks throughout the region are now having difficulties with corresponding banking relationships in developed country markets.

“This is imperiling the ability of these banks to be able to survive in trade overseas in foreign currency.”

Describing the forum as “useful”, Minister Mitchell further stated that prior to 1973, the British had the administrative responsibility for The Bahamas, and much of the Caribbean, which has changed.  However, in order for countries to progress they must do so within inter-dependent relationships, such as CARICOM, CariForum, and for Britian, the European Union.

He added it is on this platform that they will be meeting in Grand Bahama. It is hoped that the visitors will be able to see what the island has to offer.  Minister Mitchell concluded by saying he knows the Ministry for Grand Bahama will pull out all the stops to make the island ready.

Minister Darville noted that the Forum provides members of the Caribbean an opportunity to hold discussions on important bi-national, regional and international issues with the United Kingdom.

“This two-day dialogue will cover a range of issues including Global and Regional challenges, the 2030 Sustainable Development Agenda, Climate Change, Crime and Security, Financial and Economic Issues, Health and Education and Caribbean-UK Cooperation.”

Delegates have already started to arrive in Grand Bahama.