Arbitration Sector Considered to Hold “Great Potential” for the Country 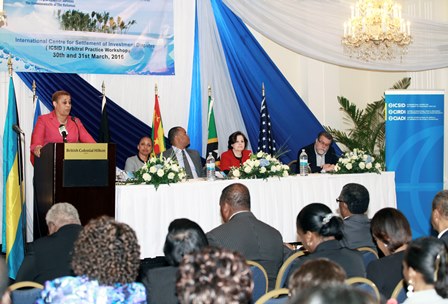 NASSAU, The Bahamas – The Minister of Financial Services, the Hon. Hope Strachan says that the establishment of an International Arbitration Centre would be ‘good business’ for the country. She believes that venturing into this new sector would be a major boost for the economy of the country and said that every effort is being taken to pursue this market.

Minister Strachan made the statements while bringing remarks during the two-day International Centre for the Settlement of Investment Disputes (ICSID) seminar. The forum provided training on ICSID Arbitral Practice. The event was held at the British Colonial Hilton on March 30-31.

“This sector offers a wonderful opportunity for our country,” said Minister Strachan. “It has great potential for the citizens to benefit in a tangible way. We are, therefore, pursuing this market in order to build on our current offerings in the financial services sector.”

Minister Strachan said that this new market would open up opportunities for many Bahamians seeking to participate, namely legal professionals, arbitrators, senior government officials, contractors, architects, professionals in the maritime industry and others.

The Minister also said that the establishment of an International Commercial Arbitration Centre would reaffirm the Government’s commitment to creative management and economic diversification. She said it would allow professionals to expand the services they currently offer internationally and will establish a niche that can be marketed internationally and differentiate the Bahamas from other Caribbean countries.

“Last year we held three Educational seminars, and my Ministry is continuing these educational efforts by hosting the two-day workshop in conjunction with the International Centre for the Settlement of Investment Disputes (ICSID)”.

Minister Strachan further commented that “An International Arbitration Center will provide a forum for rapidly and affordably resolving disputes, and it will provide an alternative to litigation thus increasing investor confidence. This centre will not only complement the legal profession, it will also allow us to capitalize on our pristine shipping registry and our maritime services, our foreign direct investment projects, and our financial services and international business initiatives.”

Echoing similar sentiments was ICSID Secretary-General and senior ICSID counsel, Ms. Meg Kinnear, who also served as the Main instructor for the two-day seminar. She said that she was ‘impressed’ with the level of interest shown by the number of participants present for the seminar.

“It has been very encouraging to see the level of interest and participation that we have received over the past two days,” said Ms. Kinnear. “We believe that this sector would be a great addition to the financial services sector of the Bahamas.”

The Ministry of Financial Services has partnered with the International Centre for the Settlement of Investment Disputes (ICSID) to host the seminar, which was being offered in conjunction with ICSID’s 50th Anniversary celebrations.

 The ICSID Convention is a multilateral treaty formulated by the Executive Directors of the World Bank to further the Bank’s objective of promoting international investment. ICSID is an independent, depoliticized and effective dispute-settlement institution. Its availability to investors and states helps to promote international investment by providing confidence in the dispute resolution process. Today, ICSID is the world’s leading arbitral institution for investor-State disputes, administering roughly 70% of all known cases under investment treaties, contracts and laws.