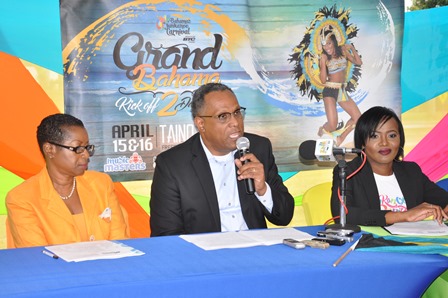 FREEPORT, Grand Bahama – Bahamas Junkanoo Carnival was officially launched in Grand Bahama on Monday, April 4, by Minister for Grand Bahama, the Hon. Dr. Michael Darville, who said this year’s festival will surpass the success of the inaugural event last year.

Friday, April 15, and Saturday, April 16, 2016, will be the days that all roads will lead to Taino Beach for a weekend of entertainment, food and activities for the whole family.

During a press conference at the Bahamas Junkanoo Carnival office, the Minister said he was pleased to endorse the event, which last year benefitted not only the Grand Bahama Special Olympics, but 52 vendors, 600 people who were employed and 310 small- and medium-sized businesses who benefitted or profited.

With $1.2M spent to host the event, some $5.5M was injected into the local economy where most of the hotel rooms were occupied and car rentals were sold out.  According to the Minister, “Approximately 30,000 people came together in the spirit of culture and community.  By all measures, the inaugural Bahamas Junkanoo Carnival was a success.”

Minister Darville congratulated Ms. Ginger Moxey and her team for their hard work during the inaugural event. Ms. Moxey explained that of the $1.2M spent last year, 98 per cent of it was done so locally.

Highlighting the entertainment for Junkanoo Carnival this year are two headliners: the Legendary Ronnie Butler and Visage. There will also be activities such as the Beach Olympics on Saturday, and the added feature, an air show.

Director of Tourism, Grand Bahama, Betty Bethel, said the Ministry of Tourism is pleased to be a part of this, the second year for Bahamas Junkanoo Carnival. The Ministry has taken the opportunity to promote the event in all of the major gateways and, as a result, there will be a mega fam trip where some 50 travel agents and foreign media from Paris, Canada and the United States will be in attendance.

As the event is held at a time of year when the country needs a boost, Ms. Bethel added she feels this year will top the success of the inaugural event.

Nuvolari Chotoosingh of the Ministry of Tourism said the Grand Bahama Air Show on Saturday, April 16, will feature some 75 aircraft that will arrive on island next weekend. He said the group is pleased that the event will be held during Junkanoo Carnival, and particularly at the beach. There will also be a career fair for those interested in the aviation field.

The entire community is being encouraged to support the event and tickets will go on sale on Wednesday. As was the case last year, tickets may be obtained for daily events, or one ticket for the entire weekend.