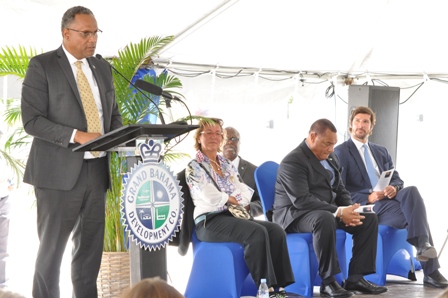 Situated at the intersection of Grand Bahama Highway and Fortune Bay Drive, the new facility was officially opened May 2, 2016 by Prime Minister the Rt. Hon. Perry Gladstone Christie. It was constructed at a cost of just over $4 million dollars.

The Minister for Grand Bahama pointed out that it was Sir Jack back in 2009 who pointed out that the Casuarina Bridge, which connects the east end of Grand Bahama to the rest of the Island, was constructed 60 years ago and was not built to the greatest specifications, which dictated the need for the construction of another bridge.

He reminded all that Sir Jack had a concern that if anything happened to the Casuarina Bridge that we would have two islands, east and west Grand Bahama, and the residents in the east would have to swim or take a boat to access the airport, harbour, medical facilities and other essential services.

According to the Minister, in 2013, the Grand Bahama Port Authority, of which Sir Jack was co-owner, awarded a $4.3 million dollar contract to All Bahamas Construction and Waugh Construction for the building of the alternative bridge across the Grand Lucayan Waterway.

He said the new bridge was envisioned to provide a direct route from East Grand Bahama into downtown Freeport in order to create greater efficiency, lessen travel time and reduce fuel costs for residents and businesses, especially the faculty and students of the Northern Campus of the College of The Bahamas.

“Sadly, on January 13th 2015, Sir Jack Hayward passed away. Nevertheless, the leadership he exemplified and his ability to unite and inspire others around a vision and work towards a common goal has been a significant driver behind the successful execution of this project.

“Unfortunately, he did not live to see this day, but on behalf of all of us who knew him and worked closely with him, I would like to take this opportunity to thank his family and the principals of the Grand Bahama Port Authority for facilitating this project and bringing this essential infrastructural upgrade to a reality,” Dr. Darville stated.

The Grand Bahama Minister added that he is pleased with the excellent working relationship that the Government has established with the Grand Bahama Port Authority, and that he is honoured to have worked in partnership with the private partners to provide administrative support for the bridge construction and other projects.

“This approach to governance clearly demonstrates synergy and must continue in the way forward.

“This administration remains committed to advancing and developing the island of Grand Bahama and improving essential infrastructure and services in order to enhance the quality of life for all residents from east to west,” he stated.

Dr. Darville pointed out that over the past four years the Government has upgraded all clinics on the island, constructed a new state of the art fire station, and begun constructing the new Fishing Hole Road Bridge, which will finally end the vexing problem of residents of west Grand Bahama being cut off from essential services during and in the aftermath of a tropical storm, flood, or hurricane.

“Although the challenges we face as an island and as a country are great, this accomplishment that we celebrate today, is proof of how much we can get done when we do it together,” the Minister said.

Mr. Graham Torode, President and CEO of the Grand Bahama Development Company also touched on Sir Jack’s contributions saying that he was a passionate man who brought great enthusiasm and focus to everything that he did.

“The construction of this new structure, which will forever connect the east and west of Grand Bahama is a fitting testimony to his determination to improve the quality of life on Grand Bahama.

He then applauded the two local contractors, ABC Construction who built the bridge structure and Waugh Construction who completed the road works. The bridge is more than 200-feet-long and has 35-foot clearance above the waterway.