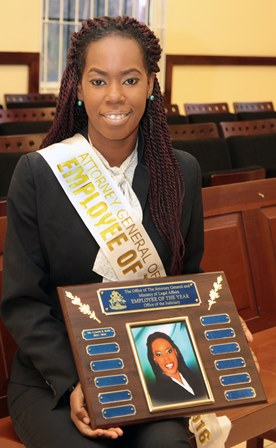 NASSAU, The Bahamas – Lynette Sharan Rolle, secretary to the Chief Magistrate, has been named Employee of the Year 2015/2016 in the Office of the Attorney General and Ministry of Legal Affairs.  Ms. Rolle joined the Public Service as a Clerk on October 1, 2007 working in the Central Registry of the Magistrate’s Courts.  Since that time she grew tremendously in performance and deportment, moving to the position of Secretary to Chief Magistrate Joyann Ferguson-Pratt and performing at the level of a Chief Executive Secretary in the running of the Chief Magistrate’s Office.  Knowledgeable and efficient, Ms. Rolle has earned the respect of her boss, peers, and members of the public, who appreciate her helpful and pleasant manner.  (BIS Photo/Derek Smith)