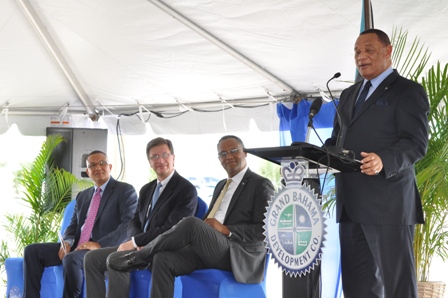 FREEPORT, Grand Bahama – During the official opening the Sir Jack Hayward Bridge in East Grand Bahama on Monday, May 2, 2016 Prime Minister of The Bahamas, the Rt. Hon. Perry G. Christie pointed out that Grand Bahama must move now; and he felt that the government and shareholders of the Grand Bahama Port Authority, in cooperating and working together, will come up with a formula to attract more investors to the island.

The Prime Minister said he wanted to make three key points: The first point, “We are very near to the conclusion of complex discussions and negotiations in terms of the future of Grand Bahama.” Last night, said Prime Minister Christie, he met with Sarah St. George in Nassau, where they further discussed the way forward; he indicated that he would like to make a communication to Parliament, which he was scheduled to do on Wednesday (the deadline), but due to meetings in Washington it will have to be at the next meeting of Parliament after Wednesday.

In this communiqué, he said, “I will be informing the country of where we are, what the future will be, and [that] all must work together: it has to be integration and coordination towards getting the maximum return for the people of Freeport and the people of Grand Bahama.”

Secondly, “We have to recognize that special instruments must be created for Grand Bahama to promote it more effectively. The infrastructure is just too sophisticated, too rewarding to investors for there not to be an instrument that would be able to attract investment from all over the world at a much more significant pace than is currently done.

“Grand Bahama must now move, and we believe we are coming up with a formula where with the level of cooperation that is expected from the shareholders and from the government both, meshing the attributes that we have, [we are moving] towards maximizing the return for the people of this island.” 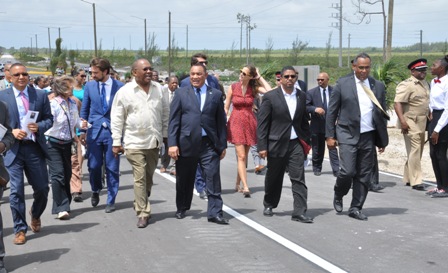 “Thirdly,” he continued, “we are living in a more competitive world and no matter what we think and what our politics is all about, countries are racing to take advantage of what they see in The Bahamas and making decisions to take them beyond us.”

Giving friendly advice about people knowing what is happening, the Prime Minister said, “Being able to taste the fruit that you’re growing, being able to appreciate what this is about because you are a public company engaged in administering a part of a country that have people in it, who have a point of view. They express their point of view and sometimes that view is expressed negatively and unfairly, negatively. Often times, fairness and unfairness have to do with what you know, what you don’t know.”

During his remarks, the Prime Minister referenced a poem recited by Sarah St. George during the ceremony which referenced those who decide to do something even though they may not benefit from it.  Sir Jack Hayward, he said, was one of those people who made decisions based on what was best for the company.

The Jack Hayward High School and the Jack Hayward Bridge are symbols of Sir Jack’s existence, but the history of Freeport must be recorded. He said that the history: the origin and challenges, the social integration that took place over the past 61 years, is all critical information because it is the history.

“I want to begin by giving you some advice here in Grand Bahama. To those who are the shareholders in the Grand Bahama Port Authority, we are going through an exercise right now (the country and the Port Authority and its Group of Companies) some 61 years after the Hawksbill Creek Agreement was signed. 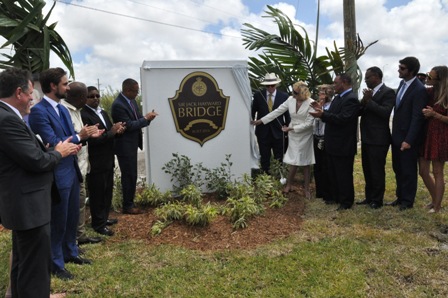 We have had the most microscopic examination of the affairs, functioning and impact of the Grand Bahama Port Authority and all of its subsidiary offshoots, whether personally owned or otherwise. We’ve done so because we believe that future generations of Bahamians, when they look back at the history would want to know that at a certain stage, someone examined in detail how this thing worked and whether or not it should continue.”

It is important for countries to do this, whoever is the government of the country must ensure that the people and their aspirations are known, lifted up, encouraged and nurtured. Mothers and fathers, continued the Prime Minister, must be given the certain knowledge that wherever they may live, there is some connection with the future.

Prime Minister Christie advised the executives of the Port Authority that when they are doing good, as was the case on the opening of the Jack Hayward Bridge, “Why don’t you have the people who are the ultimate beneficiaries of this here with you to share this occasion? That’s what I want to ask you. 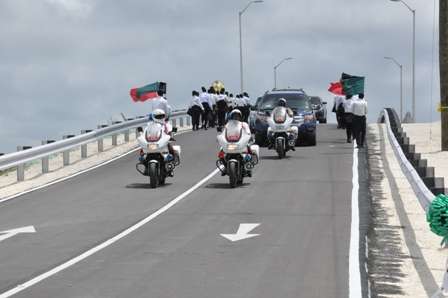 “Too often, when people sit down and examine whether or not  you have made a contribution, what do you expect them to conclude if they don’t know?

“Appreciation is enhanced by your willingness to allow people to know the good you do.”

Describing himself as being “frank”, the Prime Minister further stated that while it is nice to sit with those present and revisit the contributions made by the late Sir Jack Hayward, “the enormity of the contribution by this connection will go well into the future.”

Referring to the students who attend, and will attend the College of The Bahamas,  he said the bridge is something that is “the core and the foundation of a society.” Sir Jack, like his father, Sir Charles Hayward, were people who made contributions.

The $4.3 million bridge, which is the first major bridge to be built in Grand Bahama since the 1960s, was constructed by ABC Construction with the road work done by Waugh Construction, both local companys.