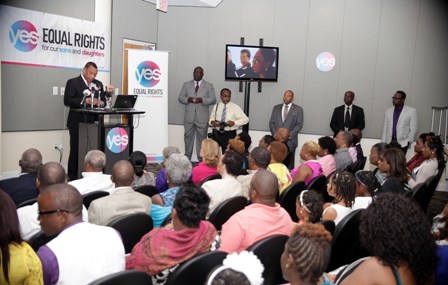 NASSAU, The Bahamas – Prime Minister the Rt. Hon. Perry Christie launched the “Yes Bahamas Campaign: Equal Rights for Our Sons and Daughters” on Sunday, April 10, at the Harry C. Moore Library of the College of The Bahamas — declaring the day of the Constitutional Amendments Referendum as Tuesday, June 7, 2016.

He announced the Co-Chairs of the campaign: Lady Sharon Wilson, former Chief Magistrate, and current President of the Senate, and Lynn Holowesko, attorney, former President of the Senate.  Both women have been very active in the community.  They will be supported by former Senators Cheryl Bazzard and Heather Hunt who will act as Co-Executive Directors.

The Prime Minister said: “On Tuesday, June 7th, Bahamians will be asked to vote YES on four common sense changes to our Constitution, so that Bahamian men and women are able to pass citizenship to their families in the same way, and so that it will be impossible for any future Parliament to pass laws discriminating against either men or women.

“I want to be clear: these bills do not propose radical change. Instead, this is about making sure that the supreme law of the land reflects our values and our commitment to fairness.

“There is nothing easy or quick or convenient about becoming a citizen this way – the process typically takes more than 10 years, and involves interviews and inspections to ensure the marriage is legitimate.

“Immigration officers are given the same investigative powers as police officers as they determine whether a marriage is legitimate. And as of 2015, it is now a criminal act to participate in a fraudulent marriage, punishable by a fine or jail or both.

“Thus, amendment two is designed only to help real Bahamian families, and its purpose is to give Bahamian women the same rights as Bahamian men.

“Amendment Three would correct that provision in our Constitution that currently discriminates against men. The change would mean that an unmarried Bahamian man could pass on his Bahamian citizenship to a child fathered with a non- Bahamian woman, if he is able to prove by DNA evidence that he is the father. This right currently belongs only to women.

“We are ready for a Constitution that supports fathers who want to keep their children close.

“Amendment Four would update Article 26 of the Constitution, so that it would become unconstitutional for Parliament to pass any laws that discriminate based on sex, which is defined as “male or female”.

“There have been some questions about the intent and the possible effects of this change. The purpose of this amendment is only to ensure that Bahamian men and women are equal under the law.

“I am going to emphasize that in The Bahamas, by law – under the Matrimonial Causes Act — marriage must be between a man and a woman, and this amendment will not change that.

“In fact, the lawyers who drafted the language of the amendment went out of their way to protect traditional marriage, by defining “sex” as meaning “male or female”. The language is clear, and the intent of Parliament – which any future court is likewise obliged to consider – is also crystal clear. 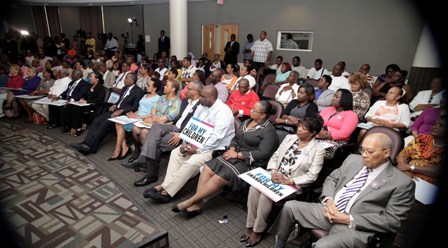 “And I am advised that there have been NO cases in Commonwealth countries like ours, with a Westminster-style Constitution, in which the right to non- discrimination on the basis of sex led to a judicially-created right to same-sex marriage.

“I repeat: this referendum will not cause same-sex marriage to become legal in The Bahamas. Marriage in The Bahamas will be legal only if it is between a man and a woman, and male and female are determined at birth.

“I am so emphatic because it is so important for Bahamians to vote on what is really at stake – equal rights for our sons and daughters – and not let false rumours or incorrect information hold sway.

“This referendum does not seek to change Bahamian society or our traditional values – instead it seeks to change the Constitution so that it more clearly reflects those values, and our shared belief in fairness.

“And so with full confidence, with immense gratitude, and with great anticipation — the baton is passed – to these very distinguished Co-Chairs, and to the many Bahamians who believe in equal rights.”