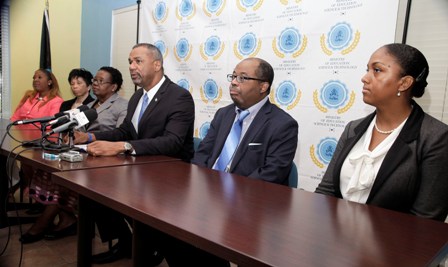 NASSAU, The Bahamas – The Bahamas Government has officially launched the Freedom of Information Bill and has planned a series of Town Meetings for public consultation on the process.

The Hon. Jerome Fitzgerald, Minister of Education, Science and Technology made the announcement, Wednesday, April 13 during a press conference at the Ministry’s headquarters on Thompson Boulevard.

Minister Fitzgerald said the Bill is of “utmost importance has “far-reaching implications” and will strengthen the country’s democracy.

“The Bill requires that due diligence is given to ensure that the new and progressive legislation is properly instituted from the onset,” he said. “Our aim is to have a very systematic implementation plan and in order for that to happen, we must have certain things in place.”

According to Minister Fitzgerald, the objective of the Bill is to give effect to “governmental accountability, transparency and public participation in national decision-making by granting to the public a general right of access to public records held by public authorities, subject to exemptions which balance that right against the public interest in exempting from government disclosure in certain circumstances.”

A committee comprising representatives from the Office of the Attorney General, the Ministry of Education, Science and Technology, the College of the Bahamas (LL.B Department), the Archives and the Data Protection Commissioner has been selected and has been meeting since June of 2015 to examine the provisions of the existing Freedom of Information Act (FOIA) to determine whether changes would be recommended in accordance with other jurisdictions and international best practices.

The Minister informed that as a result of concerns raised by members of civil society regarding FOIA No. 10 of 2012, which was passed in January 2012, the Act was not brought back into force.

“Taking into consideration the concerns raised by various members of society and international organizations, an Amendment to the Act would have been extensive indeed. It was therefore decided to create a new Bill. As a result, FOIA No. 10 of 2012 will be repealed by FOIA 2016.”

Minister Fitzgerald said the proposed legislation will usher in a “paradigm shift” in The Bahamas and the Government is determined to bring the Act into effect in the shortest possible time following consultation with the public.

The public is invited to submit suggestions to the Committee via email or letter to the Office of the Attorney General.

Meetings will be held as follows: