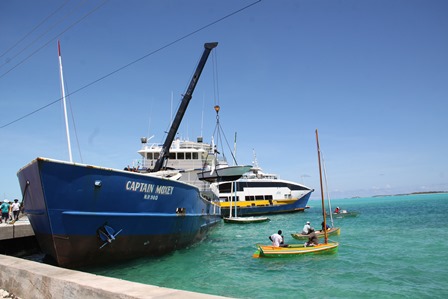 EXUMA, The Bahamas – The Hon. Alfred Gray, the Minister of Agriculture and Marine Resources, under whose purview regattas fall, expressed satisfaction with 2016 National Family Island Regatta which wrapped up in George Town, Exuma this past weekend.

“So far we’ve been blessed with good weather and without incident. The job of the Police is not difficult when you have people simply having fun,” he said. “I am very pleased with what they have told me and I am pleased with what I have seen. Regattas are simply growing.”

The Bahamas Government has injected over $100,000 into what is known as the premier sailing event and Minister Gray credits the support of the government to the success of this and the other 23 regattas, which are held throughout the Family Islands annually.

“We have boats from every island in The Bahamas generally participating in these races. Wherever the sailboats are housed they have to bring them in one place for the regattas. Generally the government’s sponsorship is the main way of bringing these boats here because the cost of bringing them here is very high. If it was left to the National Family Island Regatta Committee, many of the boats in the races today would not be here because they don’t have the means of paying for the transportation from island to island and back to the islands from which they would have come.”

Minister Gray deemed it a “joyous obligation” for the Government to contribute to the annual cultural tradition. The government does not have to do what it does. I think the government attaches a great importance to these regattas and it is showing this attachment by contributing heavily to the success of these regattas,” he said.

“Some of the people vendors at regattas use the single opportunity to make all the money they could make for the year. Beside regattas there is very little happening in many of the islands.

“George Town is no different except that Exuma has a thriving economy. So after the regatta there is another economy that they can enter into and participate in, unlike most of the regattas [where] there is nothing left until the next time.”

“There is a melting pot of different islands represented at this regatta. This is a replica of what takes place all over The Bahamas.”  He explained that regatta is an important stimulus for the various economies: “When people visit they like the place and end up buying property and building houses. The creation of employment is another example of how important regattas could be,” he said.